Fact Within Fiction: The Goetia
by Peter McLean

I’m often asked whether the magic in my books is real or not. The answer to that is no, of course not – except for the bits that are. I write fiction, but not all of it is fictional. The Goetia, that grimoire so beloved of my demon-summoning protagonist Don Drake, is very much a real thing.

When the famous magician Aleister Crowley was first introduced, in 1899, to Allan Bennett who was to become his mentor in the Golden Dawn, Bennett’s first words to Crowley were reputedly “Little Brother, you have been meddling with the Goetia.” Upon hearing Crowley’s denial, Bennett replied, “In that case, the Goetia has been meddling with you!”

The reverence with which this work is held, even in such august circles, is hardly surprising. The Ars Goetia, being the first volume of The Lesser Key of Solomon the King, also known as the Lemegeton, dates from sometime in the mid-17th century when it was compiled anonymously from much older material, most notably Johann Weyer's Pseudomonarchia Daemonum of 1563 and the writings of Cornelius Agrippa.

The book contains not only descriptions of the 72 demons supposedly summoned and bound by King Solomon but also gives details of their ranking in the demonic hierarchy, their spheres of influence and expertise and, most importantly, the seals required to evoke and bind them.

King Solomon himself is believed to have reigned in the 10th century BC. His actual existence is still debated by archaeologists, and even if he truly lived and isn’t simply some King Arthur-like figure of legend, we will never know whether or not he was actually a magician. The Rabbinical Literature suggests so, and contain references to his battles with Ashmedai/Asmodeus (ref: http://www.jewishencyclopedia.com/articles/2019-asmodeus). The initiates of the Golden Dawn certainly believed that to be the case, and that the Ars Goetia held his secrets.

This book, then, is purported to contain the knowledge and methods of the greatest Magus who ever (maybe) lived. Fast forward the nearly seventy years since Crowley’s death to the present day, and many still hold that belief. Samuel MacGregor Mathers' translation of 1904, with annotations, additions and contradictions by Crowley himself, is still in print and widely circulated amongst practising occultists today. There are whole online communities dedicated to the study and practice of Goetic Evocation.

It shouldn’t have greatly surprised me, I suppose, to have recently received a message on Twitter from one of my followers telling me he had just purchased my latest book, Dominion, and a copy of the Goetia together. I’ll confess to finding this initially rather amusing, given how little real similarity there is between actual Goetic magic and what my characters do in the books, until someone pointed out to me that reading occult fiction can be a legitimate doorway to becoming a practitioner.

Fictional magic, this acquaintance told me, does not have to be accurate in order to be inspiring, and on reflection I think that’s very true. It was reading Dennis Wheatley and the like back in the early 1980s that first at least made me aware that occultism existed, if nothing else, and set me on the path of a lifelong interest in the subject.

Part of me would like to think I have inspired that follower and possibly others to look into the history and documents behind the fiction and possibly find their own path. Another part of me wonders what the hell I’ve done here.

I’ll close on one observation. The Goetia is not a book for beginners. Evocation isn’t magic for beginners, not by a long way. Even the Bornless Ritual, which opens the Mathers/Crowley version of the text, isn’t the place to start.

At least learn the basic banishings first, folks. Don’t even pick this book up until you can do the LBRP and the Middle Pillar without a second thought. If you don’t know what those things are, don’t go out and buy a copy of the Goetia. 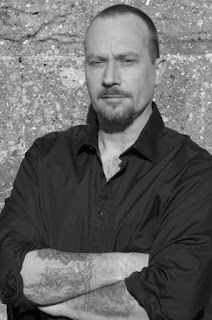 
Peter McLean was born near London in 1972, the son of a bank manager and an English teacher. He went to school in the shadow of Norwich Cathedral where he spent most of his time making up stories. By the time he left school this was probably the thing he was best at, alongside the Taoist kung fu he had begun studying since the age of 13.

He grew up in the Norwich alternative scene, alternating dingy nightclubs with studying martial arts and practical magic.

He has since grown up a bit, if not a lot. He is married to Diane and is still making up stories. 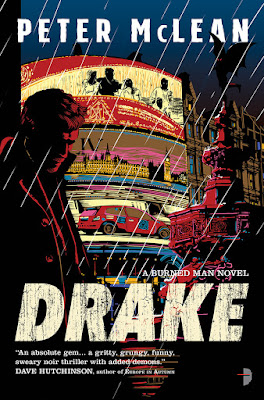 
Hitman Don Drake owes a gambling debt to a demon. Forced to carry out one more assassination to clear his debt, Don unwittingly kills an innocent child and brings the Furies of Greek myth down upon himself.

Rescued by an almost-fallen angel called Trixie, Don and his magical accomplice The Burned Man, an imprisoned archdemon, are forced to deal with Lucifer himself whilst battling a powerful evil magician.

Now Don must foil Lucifer’s plan to complete Trixie’s fall and save her soul whilst preventing the Burned Man from breaking free from captivity and wreaking havoc on the entire world. 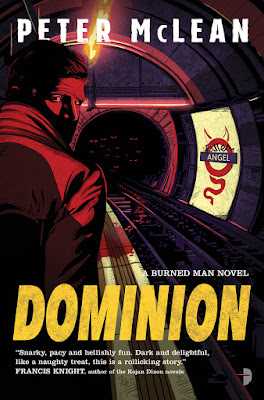 
In the tunnels deep under London, the Earth elementals are dying. Hunted by something they know only as the Rotman, the elementals have no one trustworthy they can turn to.

Enter Don Drake, diabolist and semi-reformed hitman, and an almost-fallen angel called Trixie. When the Matriarch tells Don that Rotman is actually the archdemon Bianakith, he knows this is going to be a tough job.

Bianakith is the foretold spirit of disease and decay whose aura corrupts everything it comes near, and even the ancient foundations of London will crumble eventually. Now Don, Trixie and the Burned Man have to hatch a plan to keep Bianakith from wiping out the elementals and bringing down the city.

But the Burned Man has other plans, and those may have dire consequences for everyone.

The past never stays buried, and old sins must be atoned for. Judgement is coming, and its name is Dominion.