Haven't done an interview in a long time, but finally I am back on business. James A. Moore was previously on my blog doing a guest post promoting the second book in his 'Seven Forges' series, and he is back with an interview regarding the fourth and possible the final book in the series named 'The Silent Army'.
Here it goes -

1) First of all welcome back to the blog and start by telling us a bit about yourself.

Thanks for having me back! I thought after that last time with the coffee pot and the four kittens, well, I'd have understood if I were never invited back in this lifetime. There's not much to tell, really. I'm a writer of fantasy and horror, and my latest series SEVEN FORGES is about to wrap up for the present time.

2) Will you please tell us some information about your new novel 'The Silent Army' that is not on the book blurb?

Well, it's book four in the SEVEN FORGES series, and though there is already talk about more books in the series later, THE SILENT ARMY is the end of the first story arc. That is, if I do more books, it will be an entirely different tale that takes place after the dust has settled. It is my hope that I've wrapped things up in end. The world map has certainly changed a great deal.

3) Where did you come up with the idea of writing the series? Can you tell us a bit more about your inspirations?

For me every story comes down to what if. I got an idea in my head about how it would play out if the biggest empire on the planet went soft, and what would happen if they ran across soldiers who absolutely refused to stop or negotiate. What would happen if an empire came across an army of religious fanatics who could back up their belief that they were doing the work of their gods? You have Spartans who were considered nearly unstoppable. You have Vikings who raided and took on nations that were bigger and badder and kept taking them on. Those are really the thoughts that were going through my head. Now, think on this: How different would your world be if you gods spoke directly to you? It was a notion that would not leave me alone. So I decided I should write it down.

4) So what makes the characters of these books and their world unique and interesting in your opinion?

I aimed to make them as real as possible, with human flaws and constantly changing perspectives. We are, in my opinion, all changing as we live our lives. In this case, however, one of the biggest differences as I'm concerned is that the gods actually get involved in the daily lives of some of the characters and shape them regularly.

5) Tell us a bit about the research you did for writing this book?

WellI guess you can call it research. I did a lot of reading of fantasy novels because I hadn't read ANY in fifteen years. I wanted to make sure I wasn't doing anything that was already being done.

6) Read any good book lately? Do share with us some of your favorite books from this year?

A pleasant discovery for me is that there really are some fresh voices in the genre. I am addicted to Joe Abercrombie's writing and can't recommend his SHATTERED SEA series enough. I'm a huge fan of Stephen King and one of those who absolutely loved his DARK TOWER series.

7) Can you divulge a bit more information about your upcoming projects? And may we ask what is the future for the 'Seven Forges' series?

My Next series is called TIDES OF WAR and the first book is called THE LAST SACRIFICE. In that story a mercenary named Brogan McTyre is forced to go after his family when they are taken by a religious sect that is allowed to take whomever they want by the five kingdoms. His actions are a violation of every law in the land and he goes after his family with every intention of getting them back at any cost.  His actions trigger Armageddon, and that in turn leads him on a quest to stop the world from ending.

When I'm done with that series there's a very real chance that I'm going to revisit Fellein and the Seven Forges and catch up on how different the world is when the seven different tribes of the Sa'ba Taalor are broken apart. I can't say too much but I meant it when I said there are massive changes in story for the people of those novels. 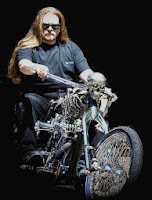 James A. Moore is the award winning author of over twenty novels, thrillers, dark fantasy and horror alike, including the critically acclaimed Fireworks, Under The Overtree, Blood Red, the Serenity Falls trilogy (featuring his recurring anti-hero, Jonathan Crowley) and his most recent novels, Blind Shadows, Homestead and the soon to be released Seven Forges. He has also recently ventured into the realm of Young Adult novels, with his new series Subject Seven. In addition to writing multiple short stories, he has also edited, with Christopher Golden and Tim Lebbon, the British Invasion anthology for Cemetery Dance Publications.
His Site - http://www.jamesamoorebooks.com/
His Twitt https://twitter.com/JamesAMoore

About 'The Silent Army' - 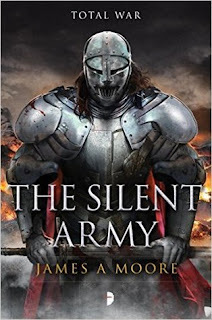 The City of Wonders has been saved by nearly miraculous forces and the Silent Army is risen, ready to defend the Fellein Empire and Empress Nachia at any cost.
The power that was hidden in the Mounds is on the move, seeking a final confrontation with the very entities that kept it locked away since the Cataclysm. Andover Lashk has finally come to accept his destiny and prepares to journey back to Fellein. The Sa’ba Taalor continue their domination over each country and people they encounter, but the final conflict is coming: The Great Wave of the Sa’ba Taalor stands to destroy an empire and the Silent Army prepares to stop them in their tracks.
Caught in the middle is the Fellein Empire and the people who have gathered together on the final battlefield. The faithful and the godless, the soldiers and killers alike all stand or fall as old gods and new bring their war to a world-changing end. Some struggles are eternal. Some conflicts never cease. The Gods of War are here and they are determined to win.

Email ThisBlogThis!Share to TwitterShare to FacebookShare to Pinterest
Labels: Author Interviews, Others